Surprise! This decadent dessert may have originated in England, not France… maybe, most likely, probably, I dunno. On my last day in London, the last meal of the journey took place at Dean Street Townhouse in Soho, where I capped it off with a Crème Brûlée (which appeared on the menu as “Trinity Vanilla Cream”). A symphony of rich creamy vanilla custard and crunchy toffee is just as sweet, no matter where it’s from. But for the sake of my “British Invasion” series, let’s say England.

A History of the Crème Brûlée

Recorded in its French form for the first time in 1691, crème brûlée has always been a simple combination of cream, egg yolk, sugar and vanilla, topped with a disc of hardened caramel which needs to be cracked through to access the dessert.

But its origins may not be French at all.

While eggs had been used as binding agents in cooking in Ancient Roman kitchens, it was not until the Middle Ages that custards were widely adopted as sweet fillings and binders for tarts, flans and other desserts.

Trinity College in Cambridge, England claims to be the birthplace of the dessert, there known as a ‘burnt cream’, whereon the college crest was burnt into sugar on top of a custard using a hot iron (which is still on display at the school).

Early French versions of the dessert had a separately prepared caramel disc layered on top of the custard, rather than the contemporary (and English) method of caramelising the sugar directly onto the custard.

Catalans claim their dessert known as ‘crema catalana’, also a rich custard (often flavoured with lemon or orange zest) topped with caramelised sugar, is the origin of the French dessert, though theirs seems to be recorded first in the 18th century.

Whatever its place of birth, it is the iconic combination of smooth and crunchy that has kept the crème brûlée unchanged for centuries, and has perpetuated its popularity internationally.

Pour milk and half & half into a medium sized bowl. Add dry pudding mix and whisk together until well blended and thickened. Pour into a shallow dish and refrigerate at least 30 minutes until thick.

In bowl of stand mixer cream butter sugar together for 2 minutes until well combined. Add in eggs and vanilla and mix until incorporated and smooth. Add in baking powder and salt, mix well. Turn mixer to low and add flour, mixing until combined.

Roll dough into 2 inch balls and place on baking sheet about 2 inches apart. Bake for 10-12 minutes until edges are just golden. Remove from oven and immediately make an indentation with a spoon in the top of the cookie.

Place approximately 1 teaspoon of crème brûlée in the indentation. Sprinkle with reserved raw sugar or brown sugar. Turn oven to broil. Place cookies under the broiler for approximately 30 seconds until the sugar browns and crystallizes. You could also use a kitchen torch to do this (recommended).

Note:
The burnt sugar topping will dissolve the longer these cookies sit, so if you would like them to have that crispy top, sprinkle with sugar and broil immediately before serving. 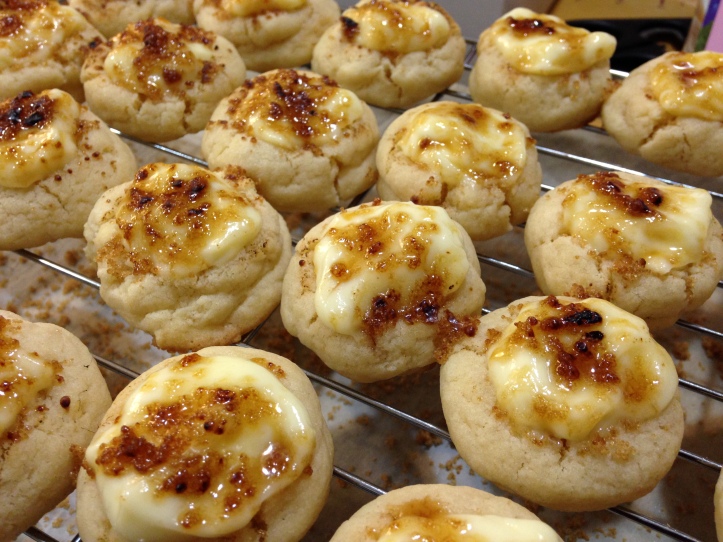